From Wars Wiki
(Redirected from AW4)
Jump to navigationJump to search 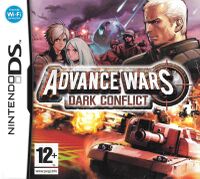 Advance Wars: Days of Ruin is a turn-based tactics game developed by Intelligent Systems and published by Nintendo. Known as Advance Wars: Dark Conflict in Europe and Australia and called (ファミコンウォーズDS 失われた光 Famicom Wars DS: Ushinawareta Hikari) in the Japanese version, this latest installment in the Advance Wars series is preceded by Advance Wars, Advance Wars 2: Black Hole Rising, and Advance Wars: Dual Strike. The game has a darker atmosphere than those of the previous installments, and has little in common with its predecessors.

The Japanese version of the game was originally unreleased, but it became available as a 2013 Club Nintendo Platinum Reward downloadable on the Nintendo 3DS's Nintendo eShop. It was released on November 30, 2013. [1]

Set in a somber, post-apocalyptic world, the game follows Rubinelle's 12th Battalion, a remnant of the country's military. Rubinelle and its rival nation, Lazuria, have been fighting a century-long war, but were interrupted when a global meteor shower bombarded the planet. In the aftermath, the 12th Battalion, also known as Brenner's Wolves, attempts to aid all survivors they encounter, despite the fact that the two battered nations have returned to war. To make matters worse, an incurable disease runs rampant throughout both nations. With everyone distracted by war, a shadowy faction uses the destruction to further its own agenda.

Almost 90% of humanity has been wiped out by a cluster of catastrophic meteor showers. These strikes have left much of civilization destroyed, and have stirred up an enormous dust cloud into the atmosphere, blotting out the sun. Survivors across the globe pick through the ruins and wreckage, while the surviving remnants of military superpowers rove the wastelands — some factions aiming to aid the innocent, while others hunt them like wolves.

The meteor strikes have annihilated much of the two warring nations, Rubinelle and Lazuria. Will, a young cadet from Rubinelle's military academy, is able to escape the ruins of the academy's mess hall and encounters The Beast, a former Rubinelle sergeant gone rogue. Before his band of raiders can attack, Will is rescued by Brenner and Lin, who lead Rubinelle's 12th Battalion (known as "Brenner's Wolves"). The group aims to rescue as many survivors as they can from the twisted wastelands. During a mission, Will finds a girl with amnesia in a ruined building. She cannot remember her own name, but has knowledge of detailed military information. Will takes to calling her Isabella, and she helps the group toward their goal.

A year after the meteors hit, Brenner's Wolves encounters the New Rubinelle Army, and learns of the war between the NRA and the Lazurian Army. Brenner reluctantly allies the group with Greyfield, the NRA's leader, and eventually defeats the Lazurians at Fort Lazuria. However, Brenner cannot accept the ruthless execution of Forsythe, the Lazurian commander, and leads his group to break the Lazurian prisoners out of an NRA camp. The Wolves make their escape, but Brenner hides out in an abandoned city to buy them some time. Greyfield, enraged at the events, uses a new weapon to obliterate the entire city, killing Brenner and the NRA troops looking for him. Later on, Lin leads the group to prevent the launch of a wave of Caulder missiles, defeating the NRA for good. In the aftermath, Lin searches for Greyfield, and shoots him dead, avenging her fallen friend.

Soon after, the 12th Battalion is suddenly attacked by Intelligent Defense Systems, a military contractor that had secretly supplied weapons first to the Lazurians, then to the New Rubinelle Army. The leader of IDS, Caulder, used the global state of anarchy to conduct biological and psychological experiments that he could not do normally. This included intentionally creating a biological threat, a disease known as the Creeper, merely to study the victim's reactions. Lin and the rest of Brenner's Wolves eventually chase Caulder to his fortress and laboratory, The Nest. He is killed here when the building is destroyed, putting an end to the war. A year later, the village of New Hope, founded by the 12th Battalion after the war, blossoms in the new age of peace. For the first time since the meteors hit, the sun is finally seen rising above the hills nearby.

Like the other Advance Wars games, the main objective for each mission is to defeat all enemy forces. There are two methods to reach this goal — either eliminate every enemy unit, or capture the enemy headquarters. The warring factions take turns building their forces and sending their units into the fray, where conditions like Fog of War and the various weather patterns may help or hinder the player's progress.

While Days of Ruin shares the [[Advance Wars (series)|Advance Wars] title, there is very little similarity to promote the connection. The previously-known nations of Wars World — Orange Star, Blue Moon, Green Earth, Yellow Comet, and Black Hole — are not present. Consequently, the familiar Commanding Officers hailing from those nations do not make an appearance either. In their place are Rubinelle's 12th Battalion, Lazuria, the New Rubinelle Army, and Intelligent Defense Systems.

CO Powers have lost much of their significance, and no longer have the ability to alter the flow of battle. The player does not gain access to CO Powers until late in the campaign, leaving them to utilize the new "CO Zone" instead. When a unit is stationed on the HQ or other non-city property, the CO can arrive on the battlefield to join with that unit, granting nearby forces a slight attack or defence boost. These effects are active for as long as the officer is on the field. Battles fought inside this zone slowly fill the officer's power meter, which in turn widens the zone's range. When the meter is full, the CO is free to activate their CO Power, which effects the entire battlefield. If the unit carrying the CO is destroyed, the power meter is drained, and the officer returns to the HQ, and may then be re-deployed with another unit.

Some units have been renamed, and some unit prices have been changed. New ground forces include the Motorbike, the Anti-Tank, the Flare, and the War Tank (formerly known as the Mega Tank). Aerial units include the Duster and the Seaplane, and the single new naval unit is the Gunboat.

A handful of new terrain types have been added, as well. The Wasteland impedes a ground unit's mobility; the Rough Sea hinders the movement of naval units. Ruins provide minor defensive cover and act as a hiding place for ground units; Mist is its naval equivalent, hiding naval units and offering light defensive cover; Fire illuminates the nearby area in Fog of War. Meteors and Plasma combine to form a blockade, but destroying a Meteor will eliminate any Plasma in contact with it, allowing units to pass by.

The campaign consists of 26 missions, with scenes from the story scattered throughout. There are also 38 training missions unlocked as the game progresses; these missions are typically more challenging than those of the campaign. Like the other Advance Wars games, the player is awarded a rank upon completion of a mission, ranging from C to S. These ratings are based on three categories, Power, Speed, and Technique.