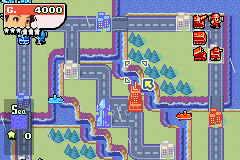 Rain is liquid precipitation. In Wars World, it is the condensation of atmospheric water vapor into drops heavy enough to fall, often making it to the surface. Rain is the primary source of fresh water for most areas of the world, providing suitable conditions for diverse ecosystems, as well as water for hydroelectric power plants and crop irrigation. However, not all rain reaches the surface; some evaporates while falling through dry air.

Rain causes the movement cost to increase for tread and tire movement classes in woods and on plains. Units under the command of Drake are unaffected by rain; his CO Power also causes it to rain. Additionally, units commanded by Olaf are affected more by the rain than other COs; his units get the same penalty in rain as the other COs get in snow.

In Advance Wars 2, rain has the same effect as in Advance Wars 1, increasing movement cost for vehicles on natural terrain; in addition, Olaf gains movement penalties similar to snow and Drake's and Sturm's units are unaffected by it. On top of that, Drake's Typhoon power makes it rain for one turn.

In Advance Wars: Dual Strike, rain no longer has an effect on movement costs; instead, rain induces Fog of War and lowers the vision range of all units by one. Drake's Typhoon still makes it rain, yet his units still have a reduced vision range as well. COs with the High and Dry skill rank would get a 20% attack boost during rain.

In Advance Wars: Days of Ruin[edit]

When raining, Fog of War appears even if there wasn't any present before the weather change and visibility is lowered to 1. Fire Pillars and properties have their vision boosts eliminated entirely. Penny's units are unaffected by the vision range reduction. Mobility remains unchanged.