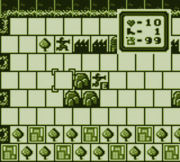 Two neighboring countries, Red Star and White Moon, are at war. It is up to the player to lead the Red Star forces to victory against White Moon. To reach this goal, the player must capture the various properties on each map in order to increase their funds and reinforce their ranks with newer units. Each nation may deploy up to 50 units, and has access to 24 different unit types.

Game Boy Wars Turbo is an enhanced version of the original Game Boy Wars. The CPU was given an upgraded decision-making algorithm to use during the enemy's turn, which allows battles to progress more quickly. 50 new maps were also released.

Game Boy Wars 2 again features an upgraded CPU decision-making algorithm, and also indicates where a unit can move or attack when that unit is selected. 54 new maps were released.

Game Boy Wars 3, the third and final sequel in the series, differs the most from the others. The game features a Beginner Mode, a 16-part tutorial, and indirect-attack units are able to move and attack in the same turn.